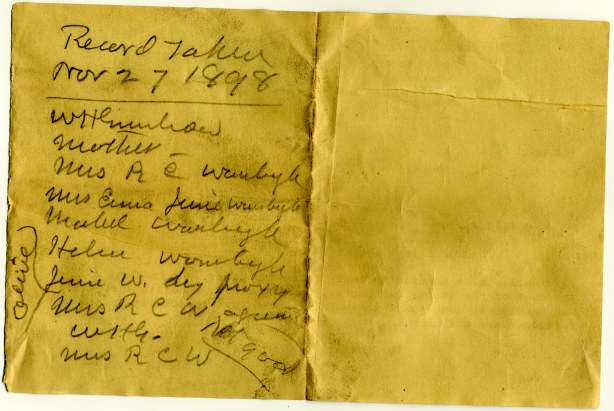 The UCSB Library’s Department of Special Collections houses more than 650 vernacular wax cylinder recordings, or home wax recordings, from the 1890s through the 1920s that capture the early spirit of the public’s interaction with recording technology. In March 2015 the collection was added to the 2014 National Recording Registry at the Library of Congress and may be the world’s largest and most diverse collection of early vernacular sound recordings.

The bulk of the collection is from the David Giovannoni Collection of Home Cylinder Recordings at the University of California Santa Barbara. It offers a unique opportunity to time-travel through sound—to eavesdrop on the private lives of our forebears. We hope that making the collection available online for all to hear will lead to a new appreciation and understanding of this rich but overlooked part of our heritage of historic recorded sound.

The home recordings found in this collection weren’t always literally made in people’s homes. Instead, they’re the audio equivalent of what Richard Chalfen calls the “home-mode of visual communication”1—which is to say, they involve the use of media for intimate, private, and personal purposes rather than public, impersonal ones. They can be distinguished both from commercial recordings made by the recording industry for popular exhibition and sale and from field recordings made by collectors for institutional preservation and academic study.

For many years, home recordings weren’t valued as highly as commercial or field recordings. Even today, some phonograph enthusiasts are all-too-ready to shave home-recorded cylinders from a century or more ago to reuse the blanks for making new recordings. To some extent, then, this represents a longterm, concerted rescue operation. Its nucleus was assembled in the 1970s and 1980s by Don Hill, one of the first people to recognize the value of home recordings as anthropological artifacts. David Giovannoni acquired Hill’s collection in the mid-1990s and added steadily to it up until the time of its acquisition by USCB in 2013.

Home, commercial, and field recordings can all feature vernacular performance traditions, oral histories, and the like, but commercial and field recordings have generally been initiated by outsiders for their own purposes and shaped with those purposes in mind. The recording industry has aimed to capture material that will sell, while fieldworkers have sought to document specific kinds of material that are of academic or artistic interest to them. By contrast, home recordings are made by and among groups of family and friends for their own use and enjoyment. The act of recording doesn’t intrude on the vernacular performance context as it does in the other cases, but instead heightens and extends it. We get to hear what ordinary people chose to record, and how they chose to adapt it to the medium, when they were in charge of the equipment and weren’t being told what to do by someone else.

And the results are often astounding. Together with hymns well-known and obscure, Stephen Foster songs, and umpteen rounds of “Marching Through Georgia,” the collection contains:

Three “channel rim” cylinders from the North American period contain the oldest dated recordings in the collection (1893, 1894, and 1895). There may be recordings as old or older but their dates are not stated in the recordings themselves.

The collection also contains larger groupings of cylinders created by the same people and discovered together years later, providing more in-depth coverage of the lives of some individual families and communities. Among these sets are: