Operatic Cylinders from the Getty Collection

Early operatic recordings have been one of the passions of composer and collector Gordon Getty. Donated to the UCSB Library in 2009, his collection of notable cylinder recordings contains many significant rarities, including one of Caruso's three cylinders recorded for Pathé 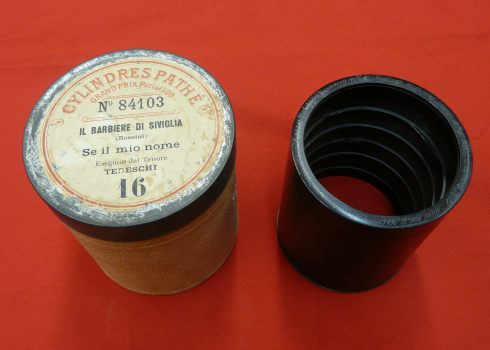 The first cylinders on the program were recorded by the Anglo-Italian Commerce Company (the name can be heard at the end of the announcement and seen on the rim of the cylinder above) during their 1902 and 1903 recording sessions in Milan. During these sessions they recorded some of the most famous performers of the day, including Enrico Caruso, and Pathé issued them in both disc and cylinder format. Pathé's recording and pressing quality was at times hit or miss, and unfortunately the identity of many of the singers is not known. However, many are clearly first-rate singers, as heard on the opening selection from La Forza del Destino.

Edison's two-minute Grand Opera Series, with a "B" prefix before the number, were some of the best operatic cylinders released, combining world-class talent, serious repertoire, and Edison's superb recording standards. They stand up with the best of disc records of the time, like Victor's Red Seal series of classical recordings. Cylinders like Scotti's aria from Falstaff are examples of Edison's recordings of international stars at their best.

Edison's later Blue Amberol series of cylinders contained a huge variety of repertoire and performances and was a mixture of reissues from their four-minute wax Amberol series, original (direct) recordings, and dubbings from Edison Diamond Discs. With branches and distribution around the world, Edison recorded American, English, French, German, and Italian singers. Unlike the Grand Opera Series with its international stars, Blue Amberols were targeted by numerical series to different countries and often showcased Edison artists of regional interest.

Further information on Edison and Pathé records can be found in the cylinder history section.